With Manufacturing Day 2016 right around the corner on Friday, October 7, we want to take a few moments to celebrate the one-year anniversary of We Manufacture CLE! We Manufacture CLE is an awareness program that spotlights the manufacturers who create quality jobs and impact the industrial sector of our community. According to the Ohio Manufacturers’ Association, manufacturing is the largest of the 20 sectors that make up Ohio’s economy, including government, accounting for 16.9% of total output in 2014 (durable goods were 9.4% and non-durable goods were 7.5% of Ohio’s total manufacturing output).

Happy Anniversary to We Manufacture CLE

Here's a roundup of the free videos produced over the past year.

Rustbelt Reclamation manufactures furniture from reclaimed materials. Great examples are found at The Corner in Progressive Field and Great Lakes Brewing Company. They do a number of restaurant and commercial installations both locally and nationally.

All car enthusiasts know that CORSA Performance is a leading manufacturer of exhaust and air-intake solutions for both the marine and automotive aftermarket industry. But did you know the company operates out of a 55,000-square-foot facility, employs just over 100 employees, and is proud of its Cleveland roots in Berea, Ohio?

Anderson International was the first manufacturing plant built west of downtown Cleveland and has earned worldwide recognition because of their numerous achievements and longevity.

WARDJet manufactures high-pressure waterjet cutting systems used to cut various materials. For example, their systems have been used to cut the tough, specialized glass used for cell phone displays and the bronze nameplates on the National September 11 Memorial in New York City.

National Office manufactures and sells office furniture to organizations in Northeast Ohio and throughout the country.

Hickory Harvest Foods manufactures and sells delicious snacks at various stores, hospitals and college campuses in Northeast Ohio and throughout the United States.

As the oldest corrugated sheet plant in the city of Cleveland, Midwest Box Company proudly serves manufacturers throughout the region by producing corrugated boxes for product distribution.

Did you know that Buyers Products Company manufactures the snowplows and saltspreaders that you see driving down interstates 90, 271, and 77 all winter long? Additionally, this privately held, fourth-generation family-owned company distributes their products globally.

Ohio manufacturing has a payroll of $39 billion, the highest total annual wages of any Ohio industry sector.

Do you know a manufacturer in Cleveland who makes a component, part, or product the general public can recognize? If so, nominate a manufacturer and join the We Manufacture CLE movement! 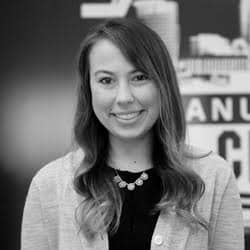