Communication is the Cornerstone of B2B Sales and Marketing Alignment

What B2B Marketers Can Learn from Cool Hand Luke

“What we’ve got here is failure to communicate” is probably the most repeated and memorable line from Paul Newman’s 1967 film “Cool Hand Luke.” What’s that got to do with B2B sales and marketing alignment? A lot.

Good communication is a cornerstone when any group of individuals is trying to accomplish a common goal, whether that be departments working together within a company, players on a team trying to win a championship, two individuals making a marriage flourish or even a herd of wildebeests just trying to survive the approaching lion near the watering hole. It’s important to note that it’s always the wildebeest that strays from the pack that gets picked off.

Finding B2B sales and marketing teams that are tightly aligned can prove to be as elusive as Newman’s character Luke Jackson was to the establishment trying to get him to conform to social norms. Simply put, siloed departments just make things harder than they need to be and ultimately slow down growth.

In a recent all-day meeting with a new client, the head of marketing kicked things off by describing the eight people in the room as the revenue team (two from marketing and six from sales). Many things made this meeting productive, but the biggest by far was the fact that the team members were all using the same language.

Sales talked about traffic, marketing qualified leads, sales qualified leads and conversion points. Marketing talked about objections in the sales process and the best type of content to help prospects become customers. Collectively, they discussed when leads should be handed off to sales. While each group handles leads at different phases of the buyer’s journey, they both had intimate knowledge of each others’ responsibilities.

For those of you old enough to remember the magical run that Michael Jordan and the Chicago Bulls had—six championships between 1991-1998—much of that success gets credited to Phil Jackson and Tex Winter, the masterminds behind the triangle offense. The offense ran like a well-oiled machine, choreographed to perfection. Each player knew where the other would be, and passes were thrown to spots on the court before the receiving player arrived. Defenses couldn’t keep up. Couple that with the talent level executing the offense, and they were unstoppable. Ask any player the key to their success and they’d say communication.

We’ve written pretty extensively on the topic, and synchronizing your sales and marketing teams isn’t as daunting as you may believe. The key is defining the overarching goal, identifying which strategies and tactics are required to accomplish that goal and joining forces between marketing and sales to execute on those strategies and tactics, such as when should marketing hand off to sales.

Never let it be said that sales and marketing aren’t communicating. Be the Chicago Bulls in this story, not “Cool Hand Luke.” Spoiler alert, he gets shot at the end.

Learn more about aligning your marketing and sales strategies in this blog. 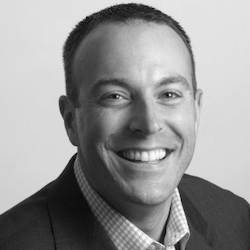